Knockout Cup:
As anticipated, the 1st round of the AM Print & Copy Sponsored Knockout Cup provided many twists, turns, goals and a couple of shocks along the way. 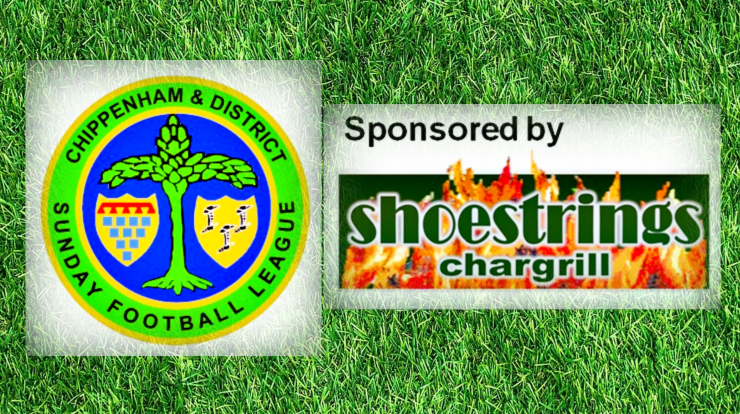 The match between Chippenham Icons, and The Castle was postponed with Castle unable to field a side. Icons have been awarded the win and progression into the next round.

Benger are still feeling the effects of a lengthy injury list and player manager was forced into playing himself at the centre of defence but pre match there was feeling that Ethan Jones returning was a huge boost. And this proved to be the case as with around 15 minutes on the clock, it was his strike from just inside the area that stung the palms of goalkeeper Liam Harris and went in for the opening goal.

As Box pressed for the equaliser, Benger stood firm and it looked as if they were to be successful in frustrating them until the break, but Box found their breakthrough with a smart finish from Spencer Drummond-Hall.

A 10 minute spell directly after the break is ultimately where this match was won and lost when Toby Gingell lost his marker and rose for a free header from a corner and just a couple of minutes later James Lye got in on the act to make it 3-1.

This lead was extended to 4-1 when Drummond-Hall grabbed his second of the match which prompted a go for broke change to a 3-4-3 formation when Flack instructed Tom Stratton to move from centre half to centre forward in a last ditch attempt to claw something from the match.

The result was instant as Stratton beat the offside trap and latched onto a through ball from Luke Todd to lift the ball beautifully over the onrushing Harris for 4-2.

Benger continued to press for further inroads into the game and they were given some fresh confidence of doing so when goalscorer Gingell was put in the sin bin for words said to the man in charge and then they went close when new signing Harry Buckley glanced a header wide from Ethan Jones’ free kick.

Box were still a threat on the break as Benger chased but the latter were disappointed not to see a penalty awarded in their favour when it looked as if Jones was tripped when he looked in a position to shoot but that was the last moment of action as the score remained the same in an entertaining match.

Steeple Ash-Ten For FC Lacock
​
This match went really as predicted with FC Lacock running out winners by quite the margin against Steeple Ashton
of Division 2.

Lacock raced into 6-0 half-time lead and it was definitely a tall order for Ashton to get themselves back in the match in the second half but they did get themselves on the scoresheet through Carl Ledbury.

Fox & Hounds were the winners of this cup match as they beat Westbury Celtic of Division 3 by 4 goals to 1.

They did not have the game as much their own way as the score suggests and it was Celtic who actually went into the break with the halftime lead as a Chris Steel goal meant they held a narrow lead at the break.

A good talking to must have occurred at the break as a Sean Snook brace with other goals from Jayson Stokes and Reece Collyer completed the turnaround.

Fisher Swoop Into Second Round Thanks To Fernandez

Lee Fernandez inspired Kingfisher to a huge win against their Division 3 opponents Dyson Institute and safe passage through to the second round.

It was Fernandez who opened the scoring albeit from a mishit cross but he then turned supplier when his corner was met by Gavin Freegard and Fernandez then made it 3-0 shortly after.

The goal of the game was arguably the fourth when Todd Richardson hit the toop corner from all of 30 yards and an own goal from a Matt Holdaway corner meant the score was 5-0 at the break.

Crossing seemed to be Institutes Achilles heel as Fernandez scored 2 more from crosses by Ben Manning and Holdaway but Institute did manage to ensure there was no whitewash when Kuga Rogozinski pulled a goal back.

Despite the heroics of the Institute goalkeeper Felix Zambelli who kept the score in single figures, two more goals ensued.
Josh Pullin scored direct from a corner and Fernandez once more found the net, this time from a through ball by Harry McCall.

Lavis With Feet Up On The Beech

Injuries upon injuries are hindering Beeches FC but they must be content with the spirited performance put in her at Lye Field vs Lavis FC despite defeat.

A competitive first ended all square with a Ryan Underwood goal for Lavis being cancelled out by Tommy Davis.
But the lack of numbers for Beeches clearly took its toll as further goals from Jack Booth, Matty Hall and Simon Parfitt gave Lavis victory.

Sporting Box Do Not Miss

Misfits’ miserable start to the season continued with a big loss at home to Sporting Box .

It was goals galore with no reply in this match as Sporting rattled in 12 in total through 2 hat-trick heroes in Jay Painter and Jake Angell, Nathan Baldwiin scored a brace and there was a goal each for James Angell, Dontea Swaby-Depass, Ed Cameron & Adam Greeves.

Old Road were unable to field a side so Devizes United are given a walkover and are into the next round.

Tandy’s Men Do The Oaky Coaky

In what was billed as a potentially tough match it was slightly disappointing that Audley FC could only field ten men in their match with Royal Oak which resulted in 7-2 loss.

Despite the man advantage The Oak started slowly and were unable to make it count and it was actually Audley who took the lead through Jordan Murphy.

Oak slowly grew into the game and they got their equaliser when Jake Duckett scored with a powerful header from Jed a Kirkwood corner.

They took the lead shortly after when a fantastic through ball from Cam Lee was smartly finished by Arlo Stone. Stone then went from scorer to creator when his pinpoint pass was calmly tucked away by Josh Kirkwood to put Oak two tot the good.

As Oak started to dominate the midfield Jake Duckett got in on the act, picking the ball up and driving from defence before unleashing a strike from 35 yards for arguably the goal of the game.

A defensive mix up resulted in Gareth Jones grabbing Audley’s second goal from the corner of the area.

However, that was a blip as they Oak finished the game off as a contest, Stone instrumental again when he played Josh Duckett down the left who with some good wing play pulled it back to Sam Chapman who rounded the keeper with some tricky footwork and tapping in on his return to the starting line up.

Stone completed his hat-trick when he got his head on a Cameron Lee cross at the far post and the final goal came when Sam Chapman put the pressure on some tired Audley legs to steal the ball and finish without fault.

Semington Taken For A Ride By Pack Horse

Pack Horse came out on top 5-2 against Semington of the Premier Division. Tyler Smith scored twice, with Ollie Deane, Adam Shiplam & Josh Madle chipped in with the other.​

It seems as there was a mix up of some of the rules as Staverton Rangers claim they were informed they will not be allowed utilise the rolling subs in their match with Spires Athletic which is now a feature in the CDSFL.

This resulted in playing part of the match with less than 11 players after they lost 3 players to injury, until this mistake was rectified by the referee.

Spires had raced into a 4-0 halftime lead. Zac Baskerville opened the scoring and that was followed by an Aiden Jackson goal for 2-0.

More controversy followed as 2 penalty decisions followed with Staverton feeling hard done by and they were both tucked away by Baskerville who ended the half with the match ball.

Staverton did pull a goal back as Kieran Morris took a well struck goal but a second from Aiden Jackson and a goal for Toby Beattie completed the scoring.

There was still time for more drama as Jake Garland saw red for an incident off of the pitch which added insult to injury for what was already a day to forget for Rangers.

Lion Purr Into Next Round

The foreseen upset was proved to be the case as British Lion cruised to a 5-0 win over FC Biddestone of Division 1.

In what was tight first half, they headed into the break with a lead of just 1 goal.

They added another 4 goals without reply to cause the upset of the day with goals coming from Glyn Rowles(2), Jason Greenidge, Jamie Hall and Ashton Schorah.

Warminster Wins Battle Of The Athletics

Stuart Green’s Warminster Athletic made it 2 consecutive wins and 3 unbeaten this season as they won a tight affair by 3 goals to 2.

Calne Athletic will be feeling a lot better about themselves having scored a couple of goals though and they will be hoping that once the off the field issues have subsided that this performance is something to take some hope from.

The first half ended 2-1, Dan Walker and Tyler Cuff for Warminster and Rhys Taylor for Calne Athletic.

The second half was also a tight affair as Ethan Green scored a 3 rd for Warminster and Aaron Tyler scored for Calne Athletic.​

One match to bring you in the Premier Division of the Shoestrings-Chargrill Sponsored Chippenham & District Sunday Football League.

With both sides struggling on the numbers front this game was always going to be a difficult one but it turned out to be the proverbial game of two halves as Corsham Wildcats took on AFC Melksham .

Melksham started the match with good movement all round the field and it did not take long for James Dark to open the scoring with barely 5 minutes on the clock. This was followed by a customary Rhys Talmash goal and with only a 3rd of the half played, Jack Groves made it 3 nil to the visitors and another cricket score was looking likely.

A lively Wildcats attack lead by Adam Mitchell were struggling to penetrate the Melksham defence of Tom Webb ,Danny Harrison, Aaron Chalice and Ollie Clarke but the attack was also being kept quiet after the explosive start and they went in at the with the score line at 3-0.

The second half saw Wildcats dominate possession with Darrin Moss pushing his team forward and keeper Sam Clark kept the home side in front with a couple of decent saves as Wildcats used both winger effectively but just could not find a way through the solid defence.

It took a wonder strike on 67 minutes as XX hit an unstoppable strike to pull one back. It was the visitors that looked for referee to blow his the final whistle as some off target shooting and good saves by Clark allowed Melksham to somewhat escape with all 3 points as another win makes that a perfect 3 and 0 and they look forward to the visit of Semington to Bowerhill for the last fixture in September.