Sunday Football League , brought many goals. Lets take a look at the action.

Super 7 For Talmash Blows Away The Icons

Despite being only in the second week, AFC Melksham put themselves firmly in the driving seat of the Premier Division as railroaded Chippenham Icons by the most handsome of score lines.

In what was thought to be a tough match to call on paper, this match was always going to be tough for The Icons as they were low on numbers this week and started with bare minimum of 11, albeit still a strong 11.

AFC started like team on fire scoring first through Martin Johnson which was followed by a Jack Woolsgrove header. Rhys Talmash then started his personal goal fest by dispatching a penalty and then continued to score at will as Melksham’s passing game across the park was really stretching the Icons’ threadbare side.

With not even 20 minutes on the clock Talmash grabbed his second and Malksham’s fourth and another from Woolsgrove and Talmash’s hattrick meant that the halftime score was 6-0.

In all Talmash ended with 7 goals, Woolsgrove with 3 and he even had the added luxury of missing another spot kick. Although he only finished with the 1 goal, Martin Johnson was the creative influence throughout and Zachary Hillier also scored a fine drive.

Despite his scoring masterclass Talmash reserved special praise for young defender Ollie Clarke for the man of the match award and goalkeeper Adam Dhimsa saved no fewer than 3 one on one chances which suggests that AFC Melksham did not have things all their own way throughout the 90 minutes.

FC Devizes United got the better of Corsham Wildacts at Biddestone Village Hall and a 5-1 score line means that Devizes are a team to be reckoned with in the Premier League this season.

The first half was quite a tight affair but a Jay Walters brace was the difference as they went in at the break 2-1 up. Lewis McCarron grabbing the reply for Wildcats.

But the second half belonged to Kassa Anderson as he himself scored a brace and with Gabe Costello adding another unanswered goal it is a great start to life in the Premier Division for Devizes.

Lacock Looking On The Bright Side Of Life

FC Lacock are keeping up with the pace being set in the Premier Division as they backed up their opening day victory with a resounding 7-0 win over Semington FC .

It seems like it was cruise control for much of the match for Lacock and Semington really struggled with the strength in depth that Lacock have with their forward line. 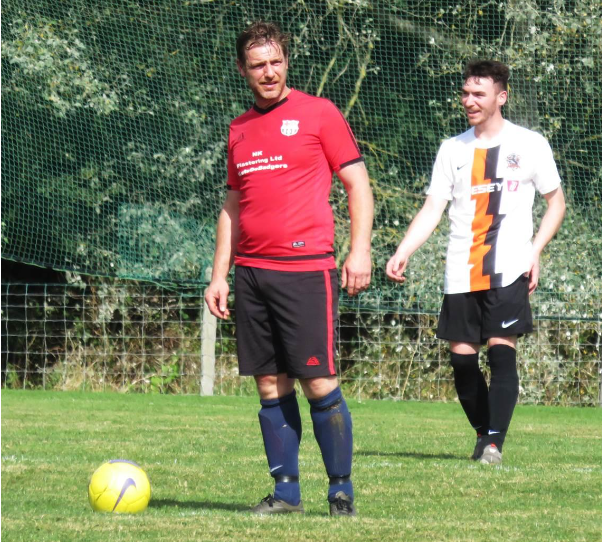 Sam Meer (Red) Of Semington Gets Ready To Launch A Set-Piece With (White) Of Lacock Watching On
Josh Bright carried on where he left off last week with another match-ball, Nick Mills scored twice and a goal apiece from Billy Gleed and Luke Clements competed the rout. 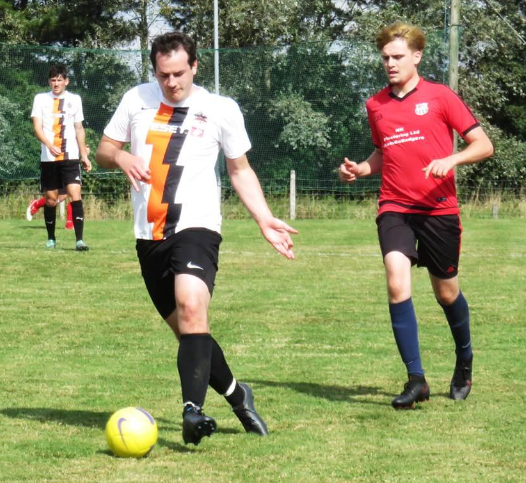 Lavis Given A Thorough Test By Sporting Box

Lavis FC were given a tough match at Lye Field and they will be happy with their mornings work after holding on for a 3-2 victory over Sporting Box.

The game started rather cagey with Lavis looking the more likely in the early stages and starting to take control and they missed a few chances to take advantage of the early pressure they were applying, most notably through Francois Allen and a Matty Hall header which rattled the crossbar from a corner. 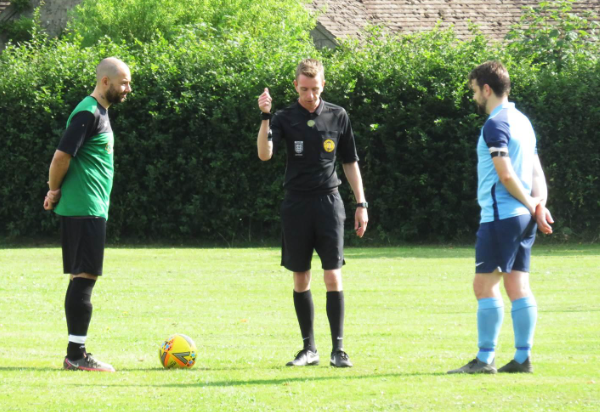 Joe Faulkner in the Sporting goal made some smart saves to keep the score at 0-0 but the first half did see the opening goal through Jack Booth. 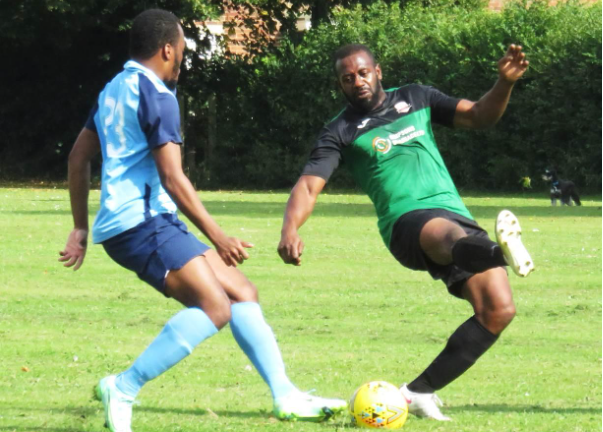 There was also a fairly long stoppage in the first half as a clash of heads results in Levi Wood suffering a broken nose.
The second goal did not come until the second half when Allen finally got the goal his chances deserved. 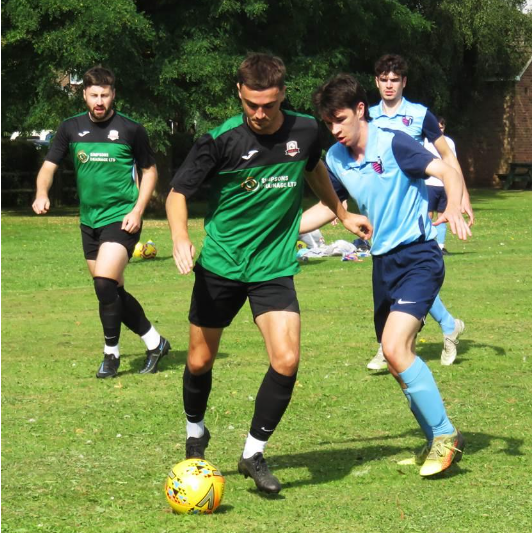 Sporting Box did respond though and they were back in the game at 2-1 when Zilwood Stead reduced the arrears.
DJ Wheeler’s second booking and subsequent marching orders gave Sporting Box real belief they would be able to get something out of the game but as they pressed for the equaliser they were hit with a sucker punch as Ryan Underwood scored the third which ultimately proved the winner. 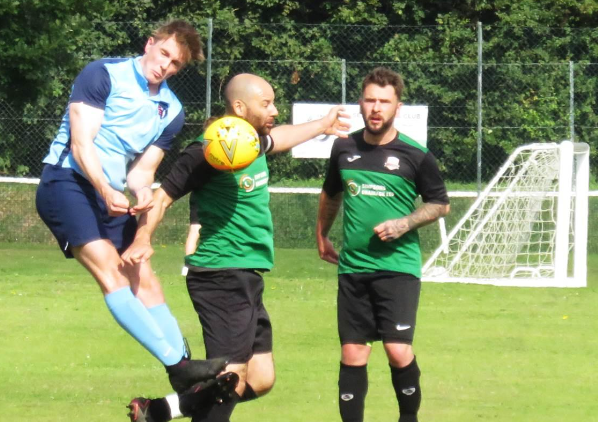 Box did get their second goal, scored from the spot scored by Nathan Baldwin which meant that we were treated to a grandstand finish but Lavis held on to take all 3 points.

Pack Horse gained their first 3 points of the season but not in the way they would have hoped as Sutton Benger were unable to field a team due to having insufficient players.

Royal Oak carried on their fine start to the season as they followed up their opening day Wiltshire Sunday Cup win with their first in the league against Biddestone FC .

A tight affair between Royal Oak and it was Biddestone who took the lead midway through the half, Joe Filby pouncing on defensive mistake and slotting home with a calm finish.

The Oak manager Richard Tandy made changes before the half was out, including bringing himself on and the results were almost instant as some good pressing from the front three resulted in Cameron Lee finishing for 1-1 at half time.

In the second period, Oak started to put their stamp on the game, Cameron Lee crossed into Rich Tandy who put the Oak ahead and they were soon two to the good, when more good good team build up play resulted in a Cameron Wildman cross to Tandy who finished with a diving header.

Biddestone then went down to 10 men after a second yellow card for Keenan Burnell and although they battled on bravely and still tested The Oak defence, they stood firm and finished the match as a contest when a mazy run from Brody Broom and a smart through ball put Daryl Nash through to the dizzy heights of the opposition box and he slotted past the keeper for 4-1.

All 8 teams in action in the Shoestrings-Chargrill sponsored Chippenham & District Sunday League Division 2 and this division really did not disappoint with plenty of goals to bring you.

Calne Athletic’s sorry start to the season continued The Castle FC put their opening day defeat behind them to register a huge victory at Goatacre Recreation Ground.

The final score of 10-0 will have pleased Castle manager Tom Perkins especially as he chipped in with a goal as well. The rest came from Chris Allen(4), Alex Surman(3), Jack Bramwell & Nathan Emm.

Ashton Win By Barest Of Margins

FC Box were involved in one of the matches of the week last Sunday but they were brough back down to earth by Steeple Ashton at Vallens Terrace.

A goal in the first half from Tom A’Court was enough for all 3 points as 1-0 was how it stayed for Dale Raines side.

Kingfisher FC got their season underway with an absolute thriller at Sutton Benger Rec with no fewer than 11 goals shared in this match and they edged to victory against Fox & Hounds (Warminster) FC .

It was Fox & Hounds who started the brighter of the 2 teams and they went in at half time holding onto a 3-1 lead.
But Fisher turned the match on its head as Eddie Baldwin started the comeback with his first of the season.

Fox made it 4-2 before Ben Manning’s free kick was bundled home for an own goal, the second of the afternoon to make it 4-3.

The equaliser came through Gavin Freegard and when Ben Manning scored when his cross looped into the top corner Harrington Burland-Beech’s goal, the turnaround was complete.

Eddie Baldwin scored his second of the season match when he latched onto Man Of The Match Mannings through ball but another goal from Fox & Hound made for a nervy finish.

United On The Road To Victory

Although Old Road had a promising performance in defeat to Premier League opposition in the Wiltshire Sunday Cup they did not quite bring that performance into the second week and they were made to pay by Calne United .

Adam Welch(2), Aaron Clegg & Gareth Lloyd with the goals in a 4-2 victory and the Old Road replies came through Seamus Mooney(2).

Another full set of fixtures taking place in the Shoestrings-Chargrill sponsored Chippenham & District Sunday Football League Division 3 to look at this week.

Back To The Routine For Audley

Audley FC continued their fine start to the season, this time with a more customary score line of 2-0 against Westbury Celtic FC .

Gareth Jones and Harry Miles scored the goals that gave them the routine victory.

An entertaining match took place at Leafy Lane as Dyson Institute FC responded to their big loss last week at the hands of Audley despite finishing second best against Staverton Rangers (Sunday) FC.

Staverton stamped their authority in large parts of the match and played some good football throughout.

Kieran Morris opened to scoring after 10 minutes from close range. The lead did not last long as Institute equalised all but 5 minutes later through Edwin Scott.

Ricky Montacute scored his first of the game with a pinpoint header, before he then scored from the spot for 3-1 after Shane Flexon was bought down. Montacute then made it 4-1 before half time with a jinxing run and finish.

The second half saw Saleen Ayoub cross for Player Manager Lance Davis volley home from close range. Institute then threatened to produce the second comeback of the day when they pulled 2 goals back through Ewan Hammond, including one from the spot to make it 5-3 before Mike Evans converted a Flexon cross to make it 6-3.

Mikey Evans then turned provider as Dyson turned the ball into there own net for 7-3 and a tidy strike from Luke Campbell then pulled Dyson back into it again for 7-4.

Flexon finally got in amongst the goal when his half volley in off the post from Daniel prince's Cross completed the scoring in the latter stages of the game.

The British Lion came out on top in this match between 2 giantkillers of last week out as the won 4-1 against a spirited Spires Athletic.

Adam Bewley rolled the years back like his hairline with a sublime goal and a penalty and Brandon Simmonds and Liam Mortimer completed the scoring.

Stuart Green will be feeling much better than last week as his Warminster Athletic side did not let their lead slip for a second week against Misfits FC.

Warminster raced away to lead 8-1 at half time and strangely the second half only yielded the 1 goal. Ben Bullis with 4 goals  and Gareth Beardshaw also scored 3 with 1 goal apiece for Ethan Green and Tyler Cuff.

Misfits’ goals were scored by Dion Calway and Ben Haines.