Let's take a look at what this Sunday holds in store for the Chippenham & District Sunday League... 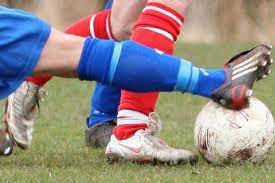 A full allocation of Premier League fixtures to look forward to this weekend in the Shoestrings-Chargrill Sponsored Chippenham & District Sunday Football League , here is your rundown of this
weekends match-ups.

It was a near perfect start for AFC Melksham last Sunday with a 5-1 victory getting them off to a great start and the only blemish being the goal conceded. Rhys Talmash started his Melksham tenure with a 4 goal salvo and if his shooting boots are on again then AFC Melksham will be confident of a victory.

Chippenham Icons’ start to life in the Premier Division did not quite go to plan and they will be looking to put that right this week.

Last week’s result could have been different but for a penalty being saved at a crucial point of the game and they are certainly a competitive outfit with more than enough to take away a result from Queen Elizabeth II Jubilee Field.

Corsham Wildacts get their season underway this week and much is expected from this team especially if the free scoring Adam Mitchell can get off to a good start.

The face an FC Devizes United who got their off to a winning start last week in the Wiltshire FA Sunday Cup and I am sure they will be hoping that dusting off the competitive cobwebs may give them a slight advantage going into this game.

Tough match to call and could well be close this one.

FC Lacock come into this game off of the back of a resounding victory against The Icons and with Josh Bright making a fast start to the season Lacock will be looking for back-to-back wins.

However, all the teams in the Premier Division are there for good reason and Semington FC will be looking to bounce back at the first attempt.

Three fixtures to look at in the Shoestring-Chargrill sponsored Chippenham & District Sunday League Division 1 with Beeches FC the team that have a break from competitive action this week.

Both teams were not scheduled a fixture last weekend so this represents the only fixture where both sides will be opening their account for the 2021/22 season.

Lavis FC of course were victorious in the RP Clarke Sheds & Fencing sponsored WG Parr Trophy last season and Aaron Latchems men are tough to overlook with a number of decent players to choose from. But Sporting Box are no pushovers and if Nathan Baldwin can find the net, then it could inspire them to victory in this season opener.

Pack Horse opened up last week with a resounding win by a margin that hit double figures albeit against one of the CDSFL’s newcomers who may have been slightly overawed by their opponents.

Sutton Benger are sure to provide a stiffer test this week and that is for sure and although these sides met in a friendly which Pack Horse won by 2 goals to nil, Kai Flack will be looking to the fact that he has a few more of his players at his disposal this time around for their Division 1 opener despite opening with a loss in the Wiltshire FA Sunday Cup last week.

Royal Oak will certainly hope to be able to follow on from last weeks result where they managed to pick up the W and score 5 goals in the process and you would be brave man to bet against that this week.

Biddestone FC opened their account with a loss at lower division opponents in Spires Athletic but they buoyed by the fact that they were on the scoresheet twice and if they can tighten up defensively then they can be a threat.

All 8 teams in action in the Shoestrings-Chargrill sponsored Chippenham & District Sunday League Division 2 and we are hopeful that it will be another week of goals from this division.

Calne Athletic will be looking to bounce back from a resounding loss in last weeks Division 2 opener but their task is certainly not the easiest as they find themselves against pre-season favourites The Castle FC .

Although Castle were on the wrong end of 7 goal thriller last week it certainly seems that they have no problem finding the back of the net with ease and will be confident of getting back to winning ways this Sunday.

The victors of that 7 goal thriller, FC Box will be thrilled that Simon Gray rekindled his scoring boots after a short time away from the game and should that continue then Box will have to be considered title challengers in this division.

Steeple Ashton are the opponents and were not in action last week so they will be champing at the bit to get their season underway and attempt to keep Gray and company as quiet as possible.

Kingfisher FC were in Wiltshire FA Sunday Cup action last week and were on the wrong side of a 3-1 scoreline and they will be hoping to put that right this Sunday.

But Fox & Hounds (Warminster) FC plundered 9 goals in their opening day victory and this would have to see them in the driving seat for a victory when the final whistle blows this Sunday.

Despite a loss in their Wiltshire FA Sunday League Cup tie last weekend, Old Road will be sure to remember that they scored twice and competed with a very handy Premier Division side despite this loss.

Calne United are opening their season off of the back of a fairly promising pre season schedule and I feel this promises to be quite the game at Shaw Village Hall.

Lets take a look at the perspective action.

Off of the back of a big win last weekend, Audley FC affirmed their status as early season favourites and Gareth Jones with 5 goals last week will need to stopped to stop the charge at this early stage of proceedings.

Westbury Celtic were involved in arguably the match of the day last week and coming back from a half time deficit of 4-1 will have them going into the match with the confidence required to get a result from this match.

I think that a combination of first match nerves and a cup draw against one of the stronger opponents in the CDSFL ultimately led to Dyson Institute losing their season opener by quite some margin but they will be hoping that their second week can prove a little more fruitful as they pit their wits against opponents from the same division for the first time.

Lance Davis’ Staverton Rangers (Sunday) FC had a great result to start the season with and they will be going into this game high in confidence that they will be able to follow up their cup win with their first league victory.

A tale of 2 teams that enjoyed victories against Division 1 opposition and that makes for a highly anticipated match at Green Lane Playing Fields.

Spires Athletic were victorious at Biddestone FC and The British Lion were resounding victors at highly fancied Beeches FC and that probably give them the slight edge going into this game.

Stuart Green will be pondering what probably should have been as his Warminster Athletic side let a 4-1 halftime lead slip in their opener but they will be hoping that the goals keep coming.

Misfits FC will be looking to put the disappointment of last weeks result behind them and will be thinking that this match represents the best opportunity to do so at the first attempt.