The prestigious title of Tae Kwon-Do World Master was awarded to local instructor Martyn Dipper this week by the Tae Kwon-Do Association of Great Britain (TAGB). 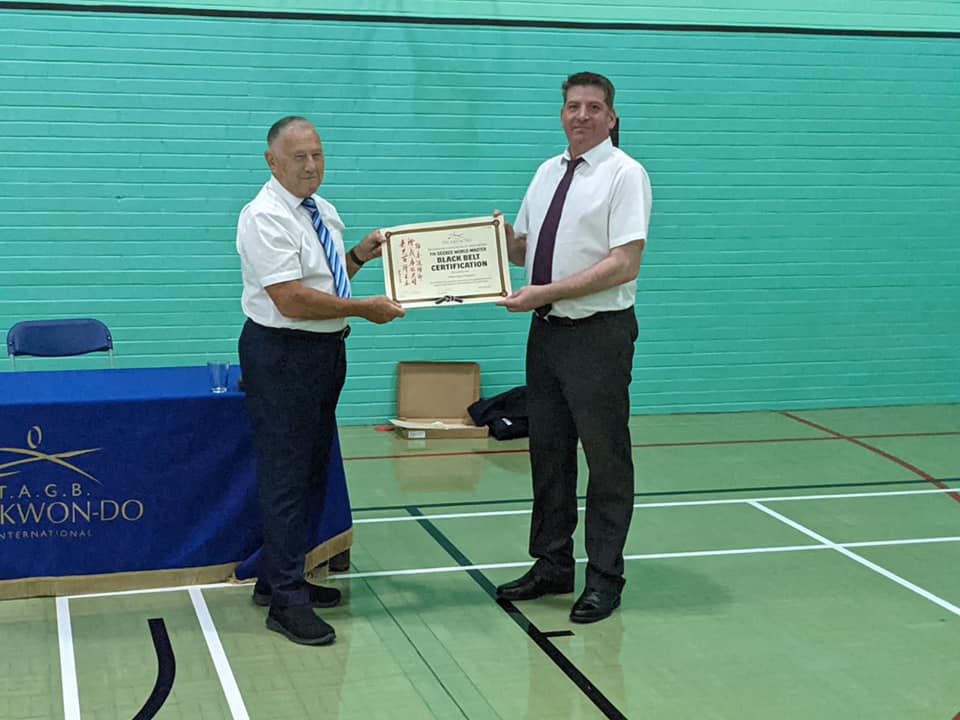 This is a title saved for the most elite practitioners after a minimum of an impressive 31 years of training, to reach the heights of 7th Degree Black Belt.

Hard to believe such a momentous journey began from a simple desire to get fit and de-stress, but it was true for this local legend.

Now 53, Martyn has trained for 31 years, staying on track for each grading along the way.

In his early days of training, he was a keen competitor, with many titles under his belt. From the very beginning, he loved to support his club in every way he could, often teaching small groups of students and eventually taking classes for his instructors.

The experienced champion then went on to focus his whole life on giving to others what he himself had gained from Tae Kwon-Do – An outlet to escape from frustration and stress, which helps to relax and return with a clearer, calmer approach.

World Master Dipper, as he shall now be known to the few hundred students who visit his clubs each week, teaches classes in Calne, Didcot, Newbury, Swindon, Thatcham, and Wantage. From these clubs, thousands of people over the years have come, learned, and grown within his friendly Tae Kwon-Do family. Among them, 4 other talented students were tested at Dan Grade levels in the hope of following in the footsteps of their inspirational leader.

Bianca Nagni (11) was the youngest team member grading to first Degree Black belt this time around. Already speaking English, Russian, and Italian, Bianca applied her hard-working attitude to remember the Korean terminology required to grade at this level alongside the tricky techniques and combinations. Ellen Bradstock (16) was also successfully promoted to 1st Dan Black Belt. Having trained since 2017, Ellen has always been focused and determined in her classes, showing maturity beyond her years. Jack Murphy (17) followed his whole family into Tae Kwon-Do. From a small boy starting out, Jack grew into a focused young man who graded to become a Black Belt, learning to listen to advice and to apply it carefully in practice, which is critical for Tae Kwon-Do success.

Stephen Depla (57) was fit and fierce in his grading. Described by his instructor as someone who exemplifies perseverance, Stephen has overcome multiple obstacles to keep going in his training and is a credit to his club. Stephen was awarded 4th Degree Black Belt status.

The grading was held under strict Covid secure policies as determined by the government, the British Tae Kwon-Do Council (BTC) and the TAGB. While some elements of a normal grading were restricted, others were enhanced or changed to allow students to demonstrate their full abilities. While this will be the case for a while longer, the newly promoted World Master still looks very positively towards the future. “It’s been a hard year for us as it has for everyone, but like always, Taekwondo has been there to keep us focused on being our best selves. I hope to train until 9th Degree ‘Grand Master’, and beyond. I hope to help as many people as possible. Tae Kwon-Do profoundly changed my life, and it makes me incredibly proud to see how much positivity it brings to others such as those who were promoted alongside me this grading.”

Students say their Master is “inspiring and motivating. He sees the strengths in people and knows how to build them up to achieve more than they ever thought possible. He is an incredible man and so deserving of this recognition of over three decades in martial arts.”