An investigation by Wiltshire Council environmental enforcement officers has led to the successful conviction of an organised fly-tipping gang. 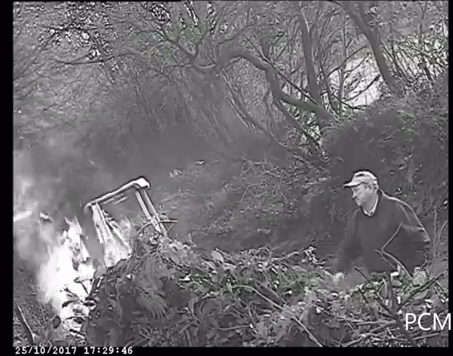 An organised fly-tipping gang has been convicted for fly-tipping and burning waste at Winchester Crown Court following a three-month covert camera operation and investigation.

On 18th November 2022 at Winchester Crown Court, fines and costs were handed out to the gang totalling £14,500.

Also convicted were Luke Edwards of Verwood Road, Wimborne, Dorset; and Michael Whittaker of Meadow Close, West Wellow, Hampshire, who are Directors of Romsey & Chandlers Ford Tree & Landscaping Services. They were convicted of a more serious offence of operating a regulated facility on land without an environmental permit by burning waste, including a fridge. Edwards, Griggs and Michael Whittaker were all residents at the Lode Hill Traveller Site, Downton, Wiltshire at the time of the offences.

All the men were part of several different tree and landscaping firms who collected all types of waste as part of their business activity and were filmed over a three-month period on an access road leading to a traveller site at Lode Hill near Downton.

They were using the site access road as their own waste dumping ground. Much of the waste was burnt, including green waste, a fridge, carpet and general waste, causing environmental damage to the surrounding area.

Locals alerted the council's enforcement officers that this location was being used as a dumping ground, and so the officers undertook regular monitoring of the area. It became such a hotspot for fly-tipping that Magistrates approved an operation to install covert cameras along the access road in an attempt to catch the offenders.

Once the required evidence was gathered, environmental enforcement officers spent many hours painstakingly going through the footage to catch the fly-tippers in action. Council officers then joined officers from Wiltshire Police to arrest the offenders, who were interviewed under caution.

The judicial process for this large-scale environmental case started in the Magistrates Court but was referred for trial to the Crown Court after the defendants pleaded not guilty to the offences.

Cllr Dr Mark McClelland, Cabinet Member for Waste, said: "This organised fly-tipping gang was prolific in destroying the local environment in this area. Not only were they avoiding lawful disposal costs by dumping this and not using approved waste sites, but they were also damaging the surrounding areas by burning waste including white goods, which gave off poisonous fumes.

"This successful prosecution is the result of many years of painstaking work by our environmental enforcement team. The team was tenacious in its pursuit of this gang, who claimed to have no involvement at the time. However, our ability to apprehend offenders by utilising cameras was key in proving that these people were the culprits in this long-running case.

"As set out in our business plan, we have committed to pursuing further prosecutions on fly-tipping, and to help with this we have invested significant funding into more cameras and more officers to catch these environmental criminals in the act throughout Wiltshire.

"Our message to any potential fly-tippers is clear: We're Targeting Fly-tippers and we will prosecute anyone who thinks it is acceptable to dump their waste in our beautiful county."