Wiltshire Air Ambulance increases on board blood for lifesaving missions

Wiltshire Air Ambulance has increased the number of red blood cell units carried on board its aircraft and critical care cars, meaning the charity can provide a level of care comparable with local hospitals.

The lifesaving charity began carrying blood in 2015, the same year it became a standalone service operating in the Bell 429 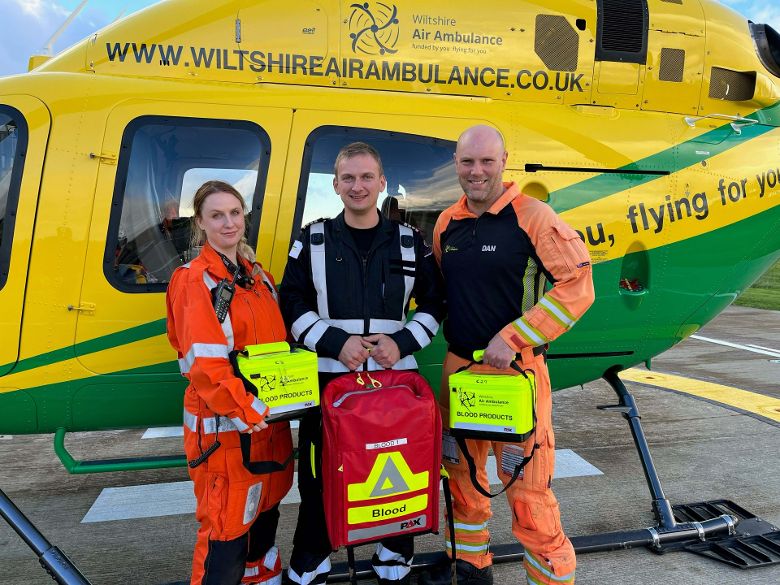 The critical care paramedics and doctors have had use of two units of O Negative red blood cells and four units of plasma Lyoplas, which is freeze dried plasma in powder form.

Now our clinical team has added two units of O Positive to its lifesaving operation. This ensures the aircrew can administer up to eight units of blood products to patients, which is the same quantity as they would receive if they attended one of the larger hospitals in the region.

So far this year Wiltshire Air Ambulance has given 21 patients blood products, with 25 units of lyoplas and 39 packed red blood cell units administered.

Paul Rock, critical care paramedic at Wiltshire Air Ambulance and Blood Lead, commented: “By doubling our capacity to four units of red blood cells, along with our four units of plasma, it means we can give the sickest patients the same blood transfusion as they would receive in the emergency department of hospitals, such as Royal United in Bath and Great Western in Swindon.

“We can ensure we give patients the right blood wherever they are and also help to preserve the National Blood Transfusion supplies, which recently experienced a shortage.”

He added: “We are well supported by the North Bristol Trust and Freewheelers and we can’t thank them enough. Without their service, we couldn’t do what we do for the people of Wiltshire, Bath and surrounding areas.”

Freewheelers are a registered charity who provide a free out-of-hours motorcycle courier service of blood products to hospitals and air ambulance charities in the South West.