Written by Staff Reporter
Published: 04 May 2022 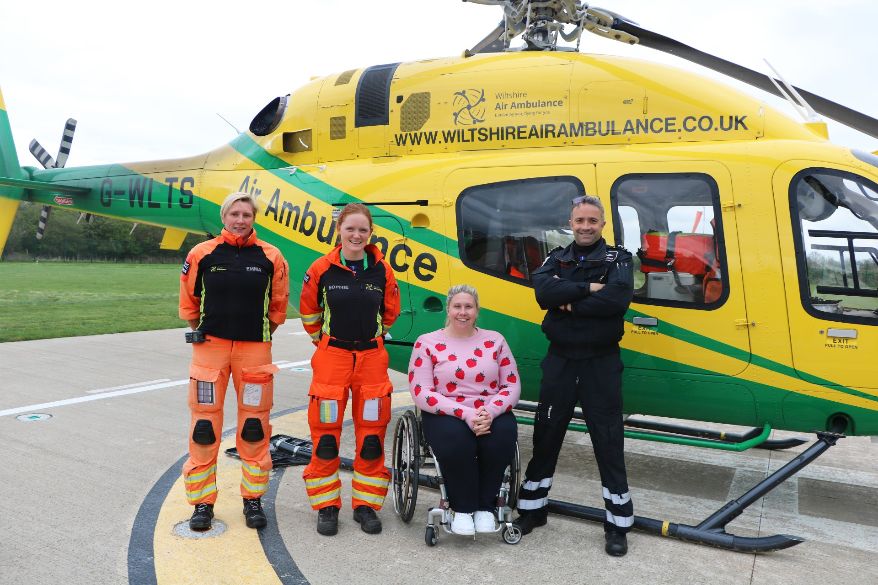 Louise, who is from Wanborough in Swindon, has pledged to support the lifesaving service after recently visiting the airbase in Semington to meet pilots, paramedics, doctors and the charity team.

The 30-year-old said: “I am honoured and proud to be an ambassador for Wiltshire Air Ambulance.

“The work in which everyone undertakes at the charity is astounding and makes such an important difference to the local community. When I learnt more about the real-life stories and how many lives the crews have saved it made me feel passionate about supporting the charity in any way I can.

“I’m excited about what’s ahead and encourage people to donate and support to such an incredible organisation which one day could save their own or a loved one’s life.”

Louise was born with a disability called Spina Bifida, which is a development congenital disorder, meaning she has been in a wheelchair her whole life. At the age of five she began participating in many sports, including swimming, basketball and
fencing, but soon found a love for wheelchair tennis.

She achieved a lifetime goal of qualifying for the Paralympic Games in London 2012 and also competed four years later in Rio. Louise has amassed more than 100 titles in singles and doubles competitions.

Louise also works as an athlete mentor, commentator and motivational speaker, sharing her stories and experiences.

Barbara Gray, director of income generation and communications at Wiltshire Air Ambulance, said: “It’s great to have Louise supporting our charity and we’d like to thank her for becoming a Charity Ambassador.

“As a Wiltshire person she understands the importance of our lifesaving service and we hope her involvement in the local area and throughout the county’s schools will help raise awareness and the funds we need to secure to continue saving lives.”

It costs £4 million a year to keep the air ambulance flying and saving lives, the equivalent of around £11,000 a day.

The charity receives no regular direct Government funding or National Lottery, so relies on generous donations from the people and businesses in Wiltshire and Bath to fund its lifesaving work.​