NORTH Wiltshire MP, James Gray is hitting the national newspaper headlines again just weeks after having to apologise for a WhatsApp message he sent saying 'a bomb' should be planted in the Labour Party chair's office.

According to the Daily Mail, Tory MP James Gray who is 'commander of charity' at St John Ambulance was hosting an event 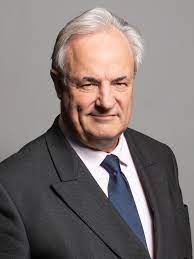 for the charity at Parliament where two of his party's most senior Asian ministers Nadhim Zahawi and Sajid Javid were guests.

Mr Gray introduced Mr Zahawi to the stage as the Health Minister but had confused Mr Zahawi the Minister for COVID Vaccine Deployment with with Mr Javid the Health Secretary who was yet to arrive at the venue.

When he was corrected, he was apparently heard to say 'They all look the same to me'.

A spokesperson for the Conservative Party said: 'These comments were misjudged. We do not tolerate racism or discrimination of any kind.'

Following the event St John Ambulance said: 'St John does not tolerate racism in any way, shape or form. We spoke with James Gray following the event about our values as an open, inclusive and progressive charity.'

Two weeks ago Mr Gray was in the newspapers when he reportedly sent a Whatsapp message on the eve of Labour's party conference in Brighton, saying 'a bomb' should be planted in Labour Party chair, Anneliese Dodds' office.

The comment had happened during a WhatsApp exchange between Mr Gray and Tory MP Robert Largan. Mr Largan had asked: "Does anybody know where Anneliese Dodds' Commons office is based? I need to deliver something to her office?"

Mr Largan called for Mr Gray to apologise for the inappropriate remark.

In a statement released by Mr Gray he apologised "It was a foolish remark made on a private WhatsApp and swiftly deleted. I meant no offence and am sorry if any was taken."

Mr Gray has been the MP for North Wiltshire since 1997.