EXPERTS are warning of a text-message scam that infects Android phones spreading across the UK. 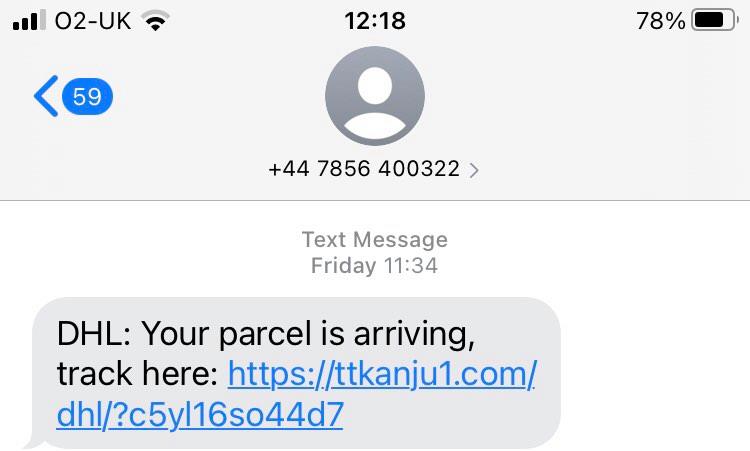 The message pretends to be from a package delivery firm and prompts users to install a tracking app - but is actually a malicious piece of spyware called Flubot.

One version of the scam has seen many peiple reporting texts which pretend to be from DHL, with a link to a website for parcel tracking.

Flubot can take over devices and spy on phones to gather sensitive data, including online banking details.

Network operator Vodafone said millions of the text messages were already being sent, across all networks.

"We believe this current wave of Flubot malware SMS attacks will gain serious traction very quickly, and it's something that needs awareness to stop the spread," a spokesman said.

Customers should "be especially vigilant with this particular piece of malware", he said, and be very careful about clicking on any links in a text message.

Other networks, including EE and Three, followed with warnings of their own.

The National Cyber Security Centre (NCSC) later issued guidance about the threat, including advice on what to do if you have already downloaded the attacker's application by mistake.

"If users have clicked a malicious link it's important not to panic - there are actionable steps they can take to protect their devices and their accounts," the NCSC said in a statement.

The malware also has the ability to send more text messages to an infected user's contacts, helping it spread.

"The seriousness of these malicious text messages is underlined by Vodafone making the decision to alert its customers," said Ben Wood, chief analyst at CCS Insight.

"This has the potential to become a denial-of-service attack on mobile networks, given the clear risk that a rogue application can be installed on users' smartphones and start spewing out endless text messages.

"The broader risk for users is a loss of highly sensitive personal data from their phones," he added.

This newest wave differs because it tries to install malicious software on the phone itself - and because of the scale of its spread.

If someone using an Android phone clicks on the link, they will be taken to a page "explaining" how to install the parcel tracking app using something called an APK.

APK files are a way of installing Android apps outside of the secure Google Play store. By default, such applications will be blocked for security reasons, but the scam page includes instructions on how to allow the installation.

Apple iPhone users are not affected as those phones cannot install Android APKs.

The Flubot malware has also spread in other countries in recent months - notably Spain, Germany and Poland.

Kate Bevan, computing editor at consumer magazine Which? said people have to be "wary" of texts.

"If you're not sure, contact the delivery company's official customer service helpline," she said.

"As ever, it's important to make sure that your mobile phone is up to date with security patches. Consider also installing mobile security software from a trusted brand."

Industry body Mobile UK said users who receive a suspicious message should forward it to 7726 to report it.