Chippenham Man Clocked at 101mph In A 60mph Zone

A Chippenham man has been reported to court after he was caught driving 101mph in a 60mph zone. 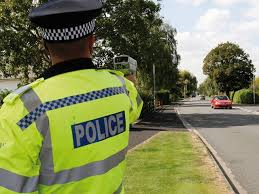 The driver of a Renault Clio was stopped on the A4 at Yatesbury on Sunday 19th July at about 6.30pm after he had been recorded driving at 41mph over the speed limit.

Sgt Will Ayres said: “When the vehicle was clocked driving at this excessive speed, the driver had been driving towards bright sunlight and had missed the marked police vehicle which was parked in the layby at the side of the road.

“This standard of driving is completely unacceptable – not only is the driver putting himself at risk, but he is also putting other road users in danger.

“The speed limit is there for a reason – there is absolutely no way to justify this level of excessive speed and I would urge everyone to take extra care when getting behind the wheel of a car and ensure you are driving within the speed limit at all times.”

The driver has been issued with a traffic offence report and will be summoned to court at a later date.