The team at Bath Cats and Dogs Home are asking for local animal lovers’ support to help them set a young dog - Benson – back on the road to recovery.

This lovely lurcher is just 11 months old and was in a really dreadful state when he was brought into the rescue centre at Claverton Down. 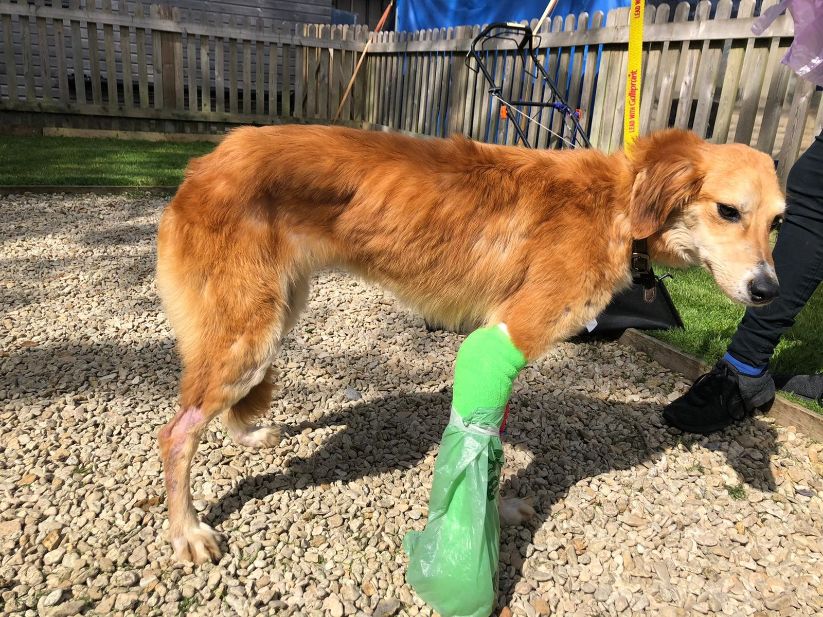 “Benson must have been in excruciating pain. We will never know what happened to him, just that he was found with a broken front leg, his fur matted and was incredibly underweight. Luckily he was found by a kind person who rushed him to the local vets. That’s when we were called as no owner could be found. “

Poor Benson was initially given pain medication to make him more comfortable, and his leg was x-rayed to see if it could be saved. Benson had broken both bones in his right foreleg, but with a delicate operation, the team at BCDH are hoping that his leg can be saved. During his op, a plate was inserted to hold his bones in place and allow them to heal. Benson is now on 6 weeks’ bed rest, with exercise restricted to short walks to go to the toilet, with no steps or jumping around at all.

You can only imagine how frustrating a young lurcher must find this!

His carers have been working on keeping him entertained during his rest. Benson has puzzles feeders and spends lots of time sitting with different carers in his kennel or on the grass outside, so he’s making lots of pals!

But Bath Cats and Dogs Home need to raise the funds to cover his total medical treatment and his recovery. So far Benson’s veterinary care has already cost over £2,000

Please donate what you can towards his treatment today and share his story. It’s vital they reach as many people as possible, to try and raise the funds for his operation. The team promise to keep everyone updated on social media, with photos on Benson’s progress (Follow them on Facebook, Twitter and Instagram @bathcdh) The team thank you in advance for your support! If they raise any additional funds over target, this will go towards life-saving veterinary treatment for other cats and dogs arriving into their care. justgiving.com/campaign/BensonsAppeal