A potentially life threatening TikTok trend, involving tiny magnets that can be easily swallowed, has triggered the NHS to call for a ban. 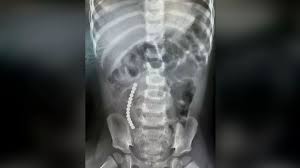 These tiny magnetic balls are widely sold as creative toys, with a recent TikTok craze seeing them used as fake facial piercings by teenagers.

The viral prank sees people place two magnetic balls either side of their tongue and wiggle it around, creating the illusion that their piercing is real.

The NHS issued a patient safety alert after at least 65 children were admitted to hospital for urgent surgery in the last three years after swallowing magnets.

The magnetic objects are forced together in the intestines or bowels, squeezing the tissue so that the blood supply is cut off. Ingesting more than one can be life-threatening and cause significant damage within hours.

Professor Simon Kenny, paediatric surgeon and national clinical director for children and young people at NHS England, said: “Magnets are a source of fascination for children, and magnetic toys can look like a cheap and cheerful way of occupying the kids, but ultimately they aren’t safe and shouldn’t be for sale.

“There is nothing fun for children or their parents about surgery to remove magnets that have been swallowed and become stuck together through different parts of the intestines, or the long-term physical problems and internal scarring that can be left behind.

“I would urge parents to be aware of the dangers associated with magnetic toys but ultimately, the only way we can prevent future incidents is to stop these items being sold altogether.”

Teenagers, who are using magnetic balls as fake facial piercings, have been recently affected in addition to the younger age groups, with a rise in admissions amongst older children.

Unlike traditional magnets, these ‘super strong’ magnets, less than 6mm in diameter, are powerful in magnetism and can be easily swallowed.

One case involved 18-month-old twins, one of whom swallowed 23 magnets which closed into a loop and created a potentially lethal bowel twist. The toddler needed emergency surgery at Addenbrooke’s Hospital in Cambridge, where doctors were able to remove the magnets.

The trauma left holes in the child’s bowel which required stitching, but he has since recovered.

A precautionary scan found that his twin brother had also ingested four magnets, which necessitated keyhole surgery to remove.

Katrina Phillips, chief executive of the Child Accident Prevention Trust (CAPT), said: “These small magnets look so innocuous, but if a child swallows them, the magnets stick together and cut off blood supply, causing tissue to die.

“We’re warning parents to take real care when buying products containing magnets. Don’t assume that, just because you can buy something, it must be safe. If magnets don’t meet safety standards, they may be super strong and potentially life-threatening.”

The NHS Long Term Plan sets out the health service’s commitment to ensuring that there is a coordinated approach to critical care, enabling children and young people to access specialised services in times of urgent and emergency need.

The national patient safety alert on the ingestion of magnets advises every hospital and GP practice in the country that these cases should be treated as an emergency required urgent x-rays and, if magnets have been swallowed, urgent surgical referrals.

It is important not to wait for any symptoms of pain or sickness, as this could be a sign that harm has already occurred. If magnets have been swallowed, seek NHS assistance immediately at the nearest A&E.

Natasha Crookes of the BTHA said: “The BTHA believes the law should change to classify these types of products as toys so they have to meet strict toy safety regulations – that would mean a change in design to ensure the magnets are covered by a casing too large to swallow.

“Until then we are urging parents to be cautious when buying magnetic products and to only buy toys from responsible and trusted brands and to explain the dangers to their children.”