JOHN LEWIS has officially unveiled its 2021 Christams advertisement this morning. 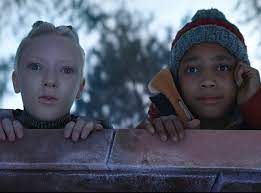 This year stars space-traveller Skye and her friend Nathan, 14, who introduces her to the traditional mince pie and novelty jumper.

Titled 'Unexpected Guest', the two-minute ad shows Skye crash-landing at the height of festivities in the woods near the home of teenager Nathan, who introduces her to the traditions of eating mince pies, decorating the tree and wearing novelty jumpers.

The soundtrack is provided by 20-year-old London singer and songwriter Lola Young who sings a cover of Together In Electric Dreams, originally released by Philip Oakey and Giorgio Moroder in 1984.

The ad first airs at 8.15pm on Thursday on ITV during The Pride of Britain Awards after launching at 6.30am for members of the ‘My John Lewis’ loyalty scheme via email access.

It is also available at 8am on the retailer’s website and social media channels - or you can see it below.