AS we gear up to Halloween, some of us have already bought and carved pumpkins - who could forget the great pumpkin shortage of 2020? 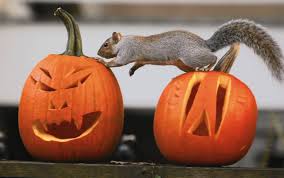 The only problem with carving your pumpkins this early is that they will start to rot and collapse.

People are posting on social media about several popular tricks to help keep your pumpkins perky, including using bleach — but wildlife charities are urging carvers to think twice.

Pumpkins are often used to decorate the outside of our homes to celebrate the season, but some wildlife including: deer, squirrels, mice and birds enjoy a nibble on a pumpkin and a bleached pumpkin could make them ill or even kill them.

There are other ways to preseve your pumpkin which are safer. One part vinegar to 10 parts water will work just as well, according to the staff of one Wildlife hospital.

Alternatively, you could try patting down the cut areas of your jack-o’-lantern with a paper towel and then apply petroleum jelly.