Wasp Warning For July And August As Numbers Expected To Surge

Homeowners across the UK are being warned of an expected surge in wasp problems this summer. 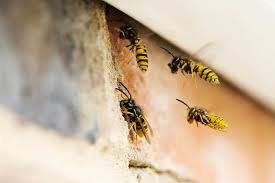 Aviva Insurance say that due to inconsistent weather throughout the year there could be a notable rise in the number of insects in July and August.

More than half of those cases happened in July and August with 54% of incidents occurring in this period, according to Aviva.

The pest control service reported that inconsistent weather in June 2021 led to a fall in wasp-related inquiries- suggesting numbers could spike in July and August.

Sarah Applegate, head of risk for Aviva General Insurance, said: "“Wasp season typically begins around the end of June and peaks throughout July and August.

“The unsettled weather during June meant that wasp infestations appear to be slightly lower this year – which could mean an even bigger influx of incidents over the rest of the summer.

“Wasps can be a worry to residents, so we’d urge people to take steps to avoid attracting them and be on their guard for any signs of an infestation.

“If anyone does encounter a wasp infestation in their home, we’d recommend that the safest and most sensible course of action would be to contact a professional pest control company or their insurer if they have suitable cover. They will be able to treat and eliminate the wasps.

"Most home insurance policies do not cover wasp infestations as part of their standard terms. However, there are special policies available and certain add-ons which provide cover.”

Aviva has provided tips for identifying and preventing problems with wasps: