With over 30,000 theatregoers attending pantomime at Wyvern Theatre every Christmas, the theatre is delighted to announce that Millie O’Connell will be joining Louie Spence in headlining this year’s spectacular family pantomime Jack and The Beanstalk from 4 December 2021 to the 2 January 2022. 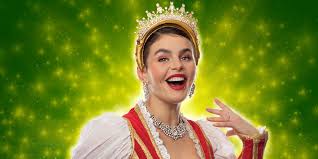 Millie O’Connell is best known for her role in the West End production and 2018 UK tour of Six The Musical, where she was the first Anne Boleyn to rock the iconic space buns. Having completed her training at Laine Theatre Arts, she has starred in 42 nd Street, RENT, Be More Chill and, most recently, Hair at the London Palladium. In 2016, she starred in the Civic Theatre’s pantomime, Aladdin, as the Slave of the Ring and, this year, Millie will be making her Swindon debut as the Queen in Jack and the Beanstalk, joining Louie Spence to make the pantomime the Wyvern Theatre’s ‘crowning glory’!

Follow Jack and climb a beanstalk of gigantic proportions to cloudland in the spectacular family pantomime, Jack and the Beanstalk. Doomed to sell his trusty cow, join Jack as he fights to outwit the evil giant and win riches beyond his wildest dreams!

Swindon Theatres’ Theatre Director, Laura James, said today, “We cannot wait to welcome the GIANT talent that is Millie O’Connell to the Wyvern Theatre for the
first time this Christmas as the Queen. We’re excited to see a star of such a popular musical on our stage and, with Millie and Louie heading up a wonderful cast and crew, there has never BEAN a better time to book your tickets for this year’s pantomime spectacular.”

Expect all the laughs, music, special effects and bundles of audience participation that Swindon audiences know and love at Jack and the Beanstalk this festive season.