A group of Kingsbury Green Academy students have taken their studies during Black History Month a stage further, by directing and performing their own school assembly. 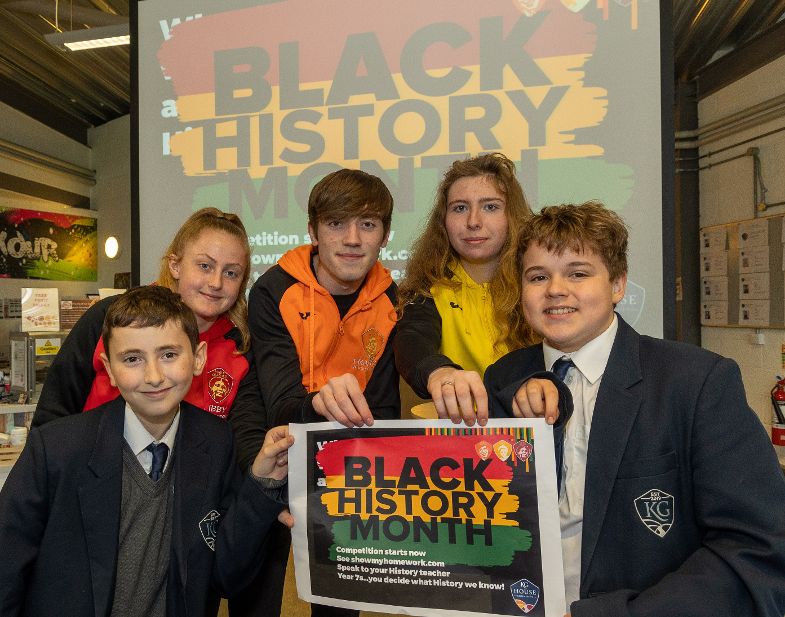 inspired, and continue to inspire, the fields of art, literature, science and improvements to our collective society.

Like many schools, Kingsbury Green Academy, which is part of the Royal Wootton Bassett Academy Trust, takes part in the initiative, encouraging students to find out more about inspirational people of colour and to recognise their achievements.

Several students at the school decided they wanted to extend their own research, and having done so wanted to share their findings with the rest of their peers.

Year 7 student Yodi Antoni said recent racial abuse of sportspeople had spurred him on to want to create an assembly.

“I felt really sad for the footballers who faced abuse, and after Black History Month a group of us sat down and did some more research about people such as British-Jamaican nurse Mary Seacole, who set up the “British Hotel”, a nursing facility for wounded soldiers behind the lines during the Crimean War,” said Yodi.

“We wrote a script, edited it and performed it in the main hall. It was terrifying going on stage. Back stage was really pressurised, but I felt good that I had done it.”

Chloe House of Year 7 said “I was surprised by how much Black History Month affects the whole world. On the day it was nerve-racking going on stage, as I have a stutter and I really had to think about using my strategies to present as I would like. I felt really proud, I’m a perfectionist and know I can improve.”

Year 9 student Zebedee Bates said: “I felt researching was really good, as it informed me what is happening in the world and how people are treated due to their skin colour. I felt really disappointed at how we as humans treat each other, we don’t treat others as we would like to be treated.”

House coordinator David Wiley said the students took Black History Month to another level, and had inspired their fellow students.

“They were meticulous in their research, very creative and worked their socks off to create something very powerful and moving,” said Mr Wiley.

“They were well out of their comfort zones, but did themselves, their subjects and the entire school proud. It’s great to see students so caring and committed to standing up against racism, and it’s reassuring to see such maturity and compassion in such young people.”