The Orionid meteor shower is one of the most active of the entire year and it’s set to reach its peak tonight, October 21. 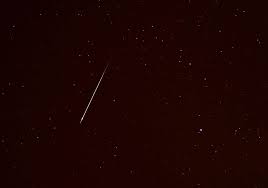 As long as the skies stays clear, we will be treated to as many as 25 shooting stars each hour as our planet passes through the debris of Halley’s Comet.

The Orionid meteor is active throughout October, but is expected to peak at around 11:30pm this evening.

According to the Met Office, there will be a ridge of high pressure across the UK on Monday evening, producing dry weather and clear skies for most.

The phenomenon gets its name from the Orion constellation – which is one of the brightest groups of stars in the sky.

Looking to the sky from Earth, the meteors appear to come from the direction of the Orion constellation, which is how they got their name.

Orion is one of the brightest and best-known constellations, containing two of the 10 brightest stars in the sky Rigel and Betelgeuse.

It has been known since ancient times and is also referred to as Hunter in Greek mythology.