Calne Police have obtained a partial closure order for an address on The Green following reports of suspected drug activity and anti-social behaviour. 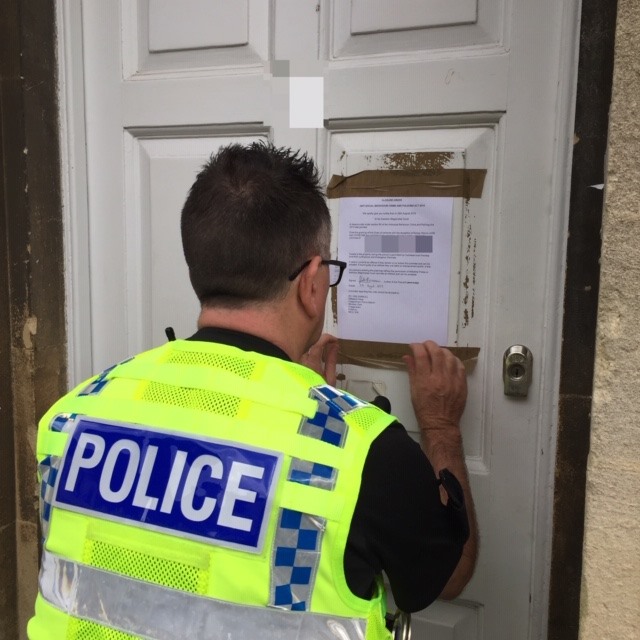 Police received information from Calne CCTV, members of the public and other residents in The Green area which suggested that local drug users and dealers have been using the property as a base for their criminal dealings.  A number of complaints had also been made to the Guinness Housing association about activity at the address.

Earlier this month, the occupant of the property and two other men from London were arrested for supplying class A drugs. Police found drugs to the value of £4000, various knives and £3500 in cash at the property at the time of the arrests.

As a result of these arrests and intelligence, officers made an application to Swindon Magistrates Court for a closure order. The order will be in place for three months .

The three month closure notice means that only the occupant and one other named person may enter the property. Anyone else is prohibited from entering and would be committing an offence if they did.

During the three month period, officers will be liaising closely with Guinness Housing so they can obtain a possession order on the property.

Calne Community Co-ordinator, PC Steve Carroll said: “I am really pleased that we have been successful in obtaining this order – it is an excellent piece of legislation that provides officers with the necessary powers in order to conduct regular checks at the address, as well as preventing anyone mentioned on the order from remaining in the premises.

“The anti-social behaviour that the neighbouring residents have had to endure is not acceptable and I’m hopeful that this order will assist in rectifying the issue.

“I would like to thank the local residents of The Green, for their co-operation and patience whilst this case was brought before the court, this is once again a great example of how police can act upon information received from members of the public whilst also protecting the most vulnerable members of our society.”