A ceremony was staged yesterday in Calne to formally proclaim Charles III as King. 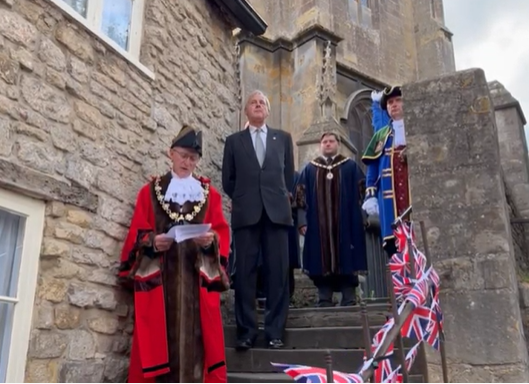 Ceremonies took place up and down the UK yesterday for the official proclamation of King Charles III.

Deputy Lord Lieutenant, Patrick Wintour paid tribute to Queen Elizabeth II's 'unerring devotion to duty'  and added  "We extend our most sincere welcome to His Majesty, to his Queen Consort and I am quite certain that the King and his family can be sure of the loyalty and support of the people of Calne and Wiltshire."

Cllr Tony Trotman remembered fondly the Queen's visit to Calne and John Bentley School in 2001 before turning to the purpose of the ceremony - the formal proclamation to the people of Calne of our new king's reign.

He said: "Yesterday, the Accession Council met at St James's Palace to proclaim our new king. The Accession Council also made an order requiring High Sheriffs to cause the proclamation to be read in the areas of their jurisdiction, the High Sheriff of Wiltshire discharged that duty earlier today and now, I ask the Town Crier to make the proclamation of the accession to the people of Calne."

Calne Town Crier, Mark Wylie then proceeded to read out the official proclamation of Charles III as King. Calne Mayor Cllr Trotman ended the ceremony with three cheers for the King.

You can watch the full ceremony below: