Yellow Weather Warning As Storm Barra Heads To The UK

THE Met Office have released another yellow weather warning for high winds as the UK is set to be battered by another storm. 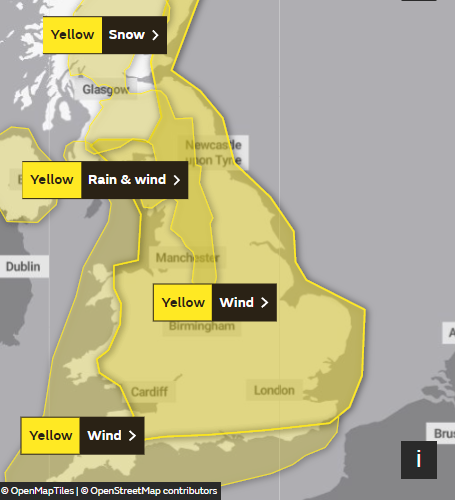 Ten days ago Storm Arwen caused chaos to large parts of the UK, now Storm Barra is heading our way.

Barra will move in from the Atlantic on Tuesday, following on from wet and windy weather throughout Monday, the Met Office said.

Frank Saunders, a Chief Meteorologist at the Met Office, said strong winds arriving across the west through Tuesday morning "will spread inland and reach eastern areas through the afternoon and early evening".

Gusts of 45-50 mph are expected widely, increasing to 60-70 mph in exposed coastal locations. In comparison, Storm Arwen lashed the UK with gusts of almost 100 miles per hour.

Barra's strongest winds will ease across inland areas into the overnight period.

The Met Office warns the following effects are likely due to the weather warning: