CALNE Town Hall became the venue for yet another display of disappointing anti-social behaviour recently, when a gang of teens gatecrashed the youth club held there on Friday evenings.

On Friday 29th October 2021 at 19.34, police were called to the town hall where youths were climbing the scaffolding 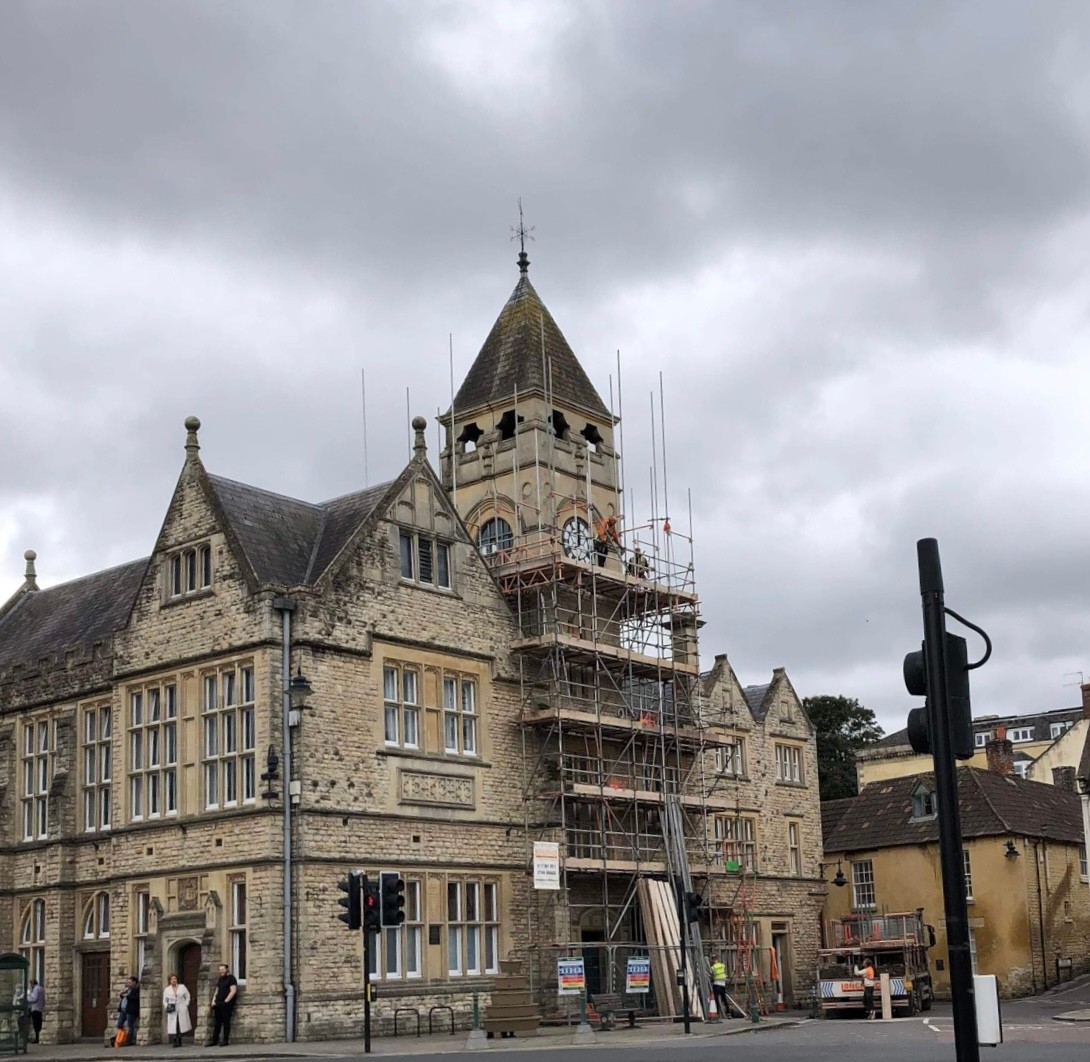 currently in place for building maintenance.

Staff members at the youth club, which was in session at the time, alerted officers to a small number of the gang who had come into the building and were running amok, banging doors, setting off a fire extinguisher, entering other rooms and shouting at the youth workers.

As officers searched the building it was also discovered that a historic wooden gavel had gone missing which is yet to be recovered.

Police officers went to speak to several of the youths who were still loitering in The Strand area and found a 15-year-old girl, heavily intoxicated and slumped on the pavement.

Officers put the girl in the rear of the police car while her parents were called to collect her. However, her behaviour escalated in the police car and she was arrested, but later released and taken home.

Another 15 year old girl, also believed to be intoxicated at the time was taken home after becoming obstructive towards officers at the scene.

While officers were dealing with the girls, other members of the gang started filming them on their phones and causing a general disturbance. Police later dispersed them from the area.

On Wednesday 3rd November, members of the Calne Neighbourhood Police Team attended a meeting with Calne Mayor Richard Jones and Deputy Mayor Robert Merrick and members of Calne Town Council to discuss what had taken place on Friday 29th October.

There has been a growing problem with anti-social behaviour within the town in recent weeks, from broken trees at the Garden of Reflection, to torn bibles at St Mary's Church. On Halloween night, Calne Fire Crew had to remove some wheelie bins which had been placed there to obstruct the road.

Whilst some residents believe the problem is inevitable due to the lack of facilities in town for our younger generations, the town council has proactively tried to meet some of these needs and invested funds to create youth activities for everyone to enjoy.

Calne Mayor Richard Jones told us: "I am shocked at such poor behaviour. Do you know where your children are when they are out? We are trying hard to have youth activities and putting lots of money in.

"I recognise it is a small minority who choose to run amok. The gavel they stole is part of the town's history and tradition, it is very old and has been used at hundreds of council meetings. If anyone knows where it is, we would like it back."

PCSO Mark Cook of the Calne Neighbourhood Police Team said: “During our meeting with the Town Council we advised that a great deal of work has been undertaken recently in regards to youths causing criminal damage and being involved in anti-social behaviour in Calne.

"Local officers have attended every address to confer with the parents or guardians of any youths found to be causing anti-social behaviour in Calne. Formal letters have also been given to support any future behavioural orders, should individuals continue to come to police notice.

"We have also be liaising with the Youth Offending Team (YOT), local schools and other agencies who may assist us in further intervention work. Steps also being taken by the Town Council to secure the scaffolding on the town hall to prevent further unauthorised access.

“A number of youths have also completed litter picking around Calne recently due to being found to be responsible for criminal damage in a local park.

“Over the past two weeks, Calne officers have worked closely with Calne Town Council CCTV. We have used their footage, along with our own police body worn video footage to identify a number of youths who were in the location and causing anti-social behaviour on Friday 29th October. To date, fifteen addresses have been visited where parents have been informed in regards to their child’s behaviour that evening.

“Due to the increase in reports of Anti-social Behaviour and criminal damage in Calne, local Neighbourhood Officers have been conducting extensive foot patrols around Calne at key times when issues have previously been reported. We have also been attending the Calne youth club which is being funded by the Calne Town Council to offer some support and prevent further issues."

“We have also been liaising with our licensed premises to remind them to be vigilant in respect of any youths attempting or approaching their customers to purchase alcohol for them.

“This sort of poor behaviour will not be tolerated, and we are urging parents and guardians to know where and what their children are doing while being away from their home addresses. Officers will be taking the necessary steps and appropriate safeguarding actions when required to deal with any youths found intoxicated or behaving in an anti-social manner.

“We will also continue to work closely with Calne Town Council, Calne CCTV and our other partner agencies to address the issue of youth related crime and anti-social behaviour in Calne.”

If you experience any youth related crime or anti-social behaviour, please call 101 or 999 if appropriate.