The first of two full moon supermoons for 2021 arrives tonight as a rare Pink Supermoon. 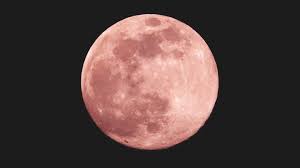 There are, of course, full moons every month as it reaches that part of the lunar cycle. But not all of them come close enough to be regarded as supermoons.

The Pink Moon or  Super Pink Moon is not actually expected to be pink in colour unless there are unusual atmospheric conditions..

The name was chosen by Native American tribes because a pink flower called Wild Ground Phlox appears in the USA at the same time as the full moon in April.

When the moon is full during the closest point in its elliptical orbit, this is known as a supermoon and our celestial neighbour then appears up to 14 per cent bigger and 30 per cent brighter.

Native Americans gave names to each full moon through the year to help them keep track of the seasons and all the expected natural and human activities at any given time of year.

Earlier this month it was 50,000 miles farther away when in its new phase.

The moon will appear to be full for three or four days, from Sunday to about Wednesday.