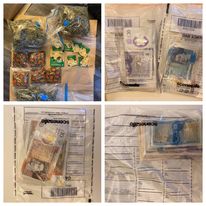 Officers from the Neighbourhood team and assisted by Police Dog Echo, attended an address following the execution of a warrant by officers.

A significant amount of Class A and Class B drugs were discovered alongside a large amount of cash and a taser.

The men have since been released under investigation while police continue their enquiries.

Calne Police say 'Please continue to assist us by reporting suspicious activity. You can do this by calling 101, visiting Wiltshire Police's website or reporting anonyously via Crimestoppers.