POLICE are investigating a suspected fraud relating to an online donation page set up to raise money in memory of four young men from Calne who died in a collision earlier this year. 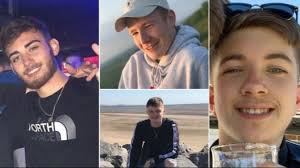 The GoFundMe page, which was titled “Jordan, Corey, Matt, Ryan Memorial”, was launched following the collision on the A4 Derry Hill back in August.

Police are investigating concerns that this fundraising page, which was not set up by any of the four families, was fraudulent and are now trying to trace everyone who donated money as police believe they may have been victims of crime.

Three people have been arrested as part of an ongoing investigation.

On 22/10 officers from Wiltshire Police travelled to the Northamptonshire area and arrested a 32-year-old woman and a 17-year-old boy on suspicion of fraud by false representation.

Yesterday (02/12) officers returned to the same area and arrested a 36-year-old man on suspicion of fraud by false representation. Due to the fact that during the visit a large quantity of Class A drugs were discovered at the suspect’s property, he was also arrested on suspicion of possession with intent to supply Class A drugs.

All three have been released under investigation while our enquiries are ongoing.

Inspector James Brain, from the Chippenham Area Community Policing Team, said: “The collision back in August was truly devastating for the local community in Calne and I know many people will have seen this fundraising page as an opportunity to show how much they cared and to ensure that a lasting memorial to the four young men was created for the town.

“I understand that people may be feeling upset and angry about this news, but I want to reassure everyone that we are carrying out detailed enquiries to understand exactly what has happened with regards to this donation page.”

Anyone who donated money to this specific GoFundMe page should call Wiltshire Police on 101, quoting crime reference 54200119835. Please let us know your name, address, phone number and how much money you donated.