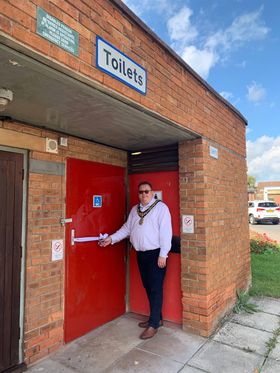 In 2015, a county-wide public consultation exercise on the future of the public convenience service had resulted in an overwhelming response that the facilities should be offered to the town councils for them to run if they felt it appropriate.

Wiltshire Council closed the toilets in April 2016 when they failed to reach an agreement to transfer the toilets to Calne Town Council.

In July this year, Calne Town Council were the winning bidders when the site was auctioned off.

Shortly after the auction, Cllr Robert Merrick told us: "This is the first time we have owned a stake of land in our own town, I will be pushing this, 'let's get moving'.

This morning the toilets were officially opened by Cllr Merrick at a closed ceremony due to Covid-19 restrictions. He told us: "We are now open! After 4 years of Calne having no toilets we are pleased to reopen this facility. "

In the meantime, Calne Town Council have recently closed a week long consultation for suggestions on how best to redevelop the site. Whatever design is decided upon, the building will include a fully compliant DDA toilet as an integral part of the design.