The Met Office have issued a yellow warning for severe thunderstorms for the forthcoming week. The warning is in place for the entire UK however there is 'significant uncertainty' in location and timings. 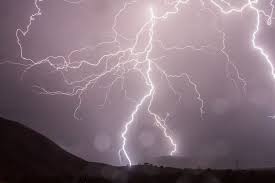 The yellow warning comes into force on just after midnight on Monday morning (August 10, 2020), and is currently in place until Thursday.

The Met Office website states: 'Areas of thunderstorms are increasingly likely to develop over the south of the UK or nearby continent late in the weekend or early next week, and will generally track north or north-westwards, potentially affecting all parts of the UK at some points during this period.

Whilst the most intense thunderstorms, in some instances associated with large hail, will most probably be those triggered by the high temperatures of the day over England and Wales, other areas of storms producing heavy rainfall and frequent lightning could reach further north at times over Scotland and Northern Ireland.'