Lansdowne Monument Guard To Stay In Place For Another 5 Years

The National Trust have had their application for planning permission to allow the guard already in place around the Lansdowne Monument at Cherhill to stay in place for another five years, granted. 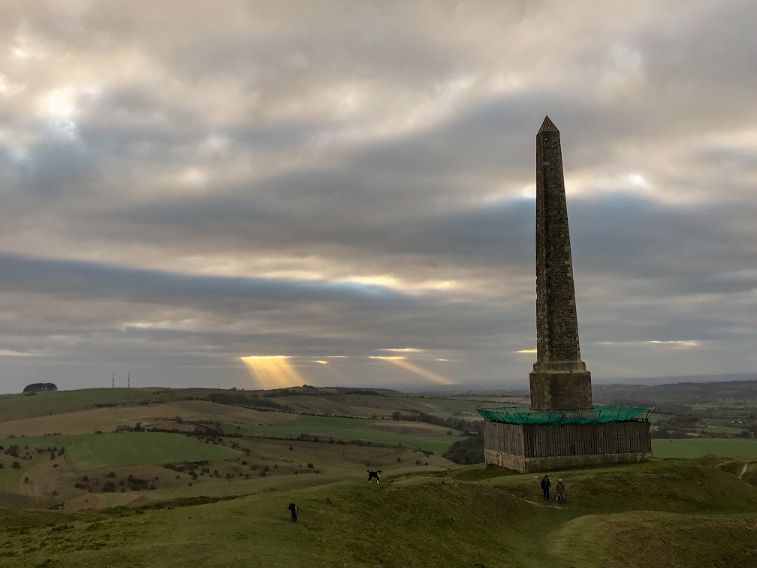 The familiar 38-metre stone obelisk at Cherhill, was designed by Sir Charles Barry and was built in 1845 by the 3rd Marquis of Lansdowne to commemorate his ancestor, Sir William Petty.

In 2013 it was necessary to erect a rubble guard and timber palistrade around the base of the Grade II listed monument which now needs renovations in order to be made safe.

Last year the National Trust applied to keep the palistrade in place for another five years in order to have time to raise the estimated £2.7 million for the renovations. The Trust said the alternative would be to fence off Oldbury hill fort, or to close the entire area owned by the National Trust.

However, at the time Calne Town Council's planning committee raised concerns that there are no plans in place for the restoration of the monument and that this application doesn't conserve the landscape of the North Wessex Downs and the World Heritage Site.

Concerns about the delay on restoration were also raised in 2017  when the 9th marquess of Lansdowne told The Times that the trust had allowed itself to be “sidetracked by quasi-political issues” such as foxhunting on its land and was failing to ensure that monuments were repaired.

On 2nd April this year, the council approved the application subject to the following conditions:

1. The scaffolding, palisade fence, stone guard netting and all associated elements shall be
removed from the monument and wider Cherhill Monument locality and the monument restored to its former, unadulterated condition on or before 01st March 2025 in complete accordance with a scheme of work which shall have been submitted to and approved in writing by the Local Planning Authority beforehand.

REASON: In the interests of reducing harm to the setting of the Grade II listed monument. The development to which this Listed Building Consent relates is not of a form for which the Local Planning Authority would consider granting permanent consent and a temporary consent can be justified only on the basis of a special, temporary need.

2. The works hereby permitted shall be carried out in accordance with the following approved plans: Design and Access Statement (prepared by National Trust) Email from National Trust confirming intention to commence repair works in 2024 (dated 04/04/19)
Location Plan Lansdown Monument 1:2500
Existing Plan Elevations (drawing number CHER-01 rev.0)
chehill.monument_19.01068.LBC_decision.notice
REASON: For the avoidance of doubt and in the interests of proper planning