At the beginning of May, the Chippenham, Calne and Corsham Community Policing Team launched a 'Best Rainbow' competition to residents, to celebrate all the lovely rainbows that have been popping up in windows across Wiltshire to support the NHS. 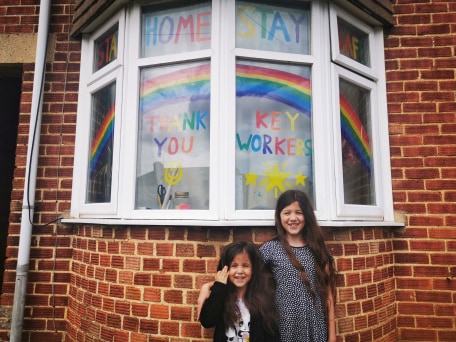 The team said: 'We have noticed many people have been placing rainbows in their windows to show support for the NHS, support for each other and to try and remain positive during this difficult time.'

Amongst the entrants were the Curtis family from Calne who were runners up in the competition.

Jamie and Helen Curtis, together with their two young daughters, Anya,8 and Isla, 5 live in Bryans Close Road and last night they and their neighbours were joined for the NHS clap by several units from Wiltshire Police.

Helen told Calne News: "We read about the competition in Calne News and we all decided as a family to enter, we took a pane of the window each and completed the rainbow that way.

"I received a phone call to say that whilst we hadn't won the overall Wiltshire one, they had decided on runners up for each local police team.

"Most of the neighbours came out to clap and we had some who were shielding who haven't been able to get out but came up especially to see the window. We even had people from other streets come down too!

"Thank you to all the residents on the street also showing their support for carers and the NHS around the country."

Helen concluded: "It will make a fantastic memory during these strange and changing times and will be wonderful to look back on in years to come and remember the good that came out of this pandemic."

Calne's own PCSO Cook took this video of the event :