With only 10 days to go until the General Election, you can't travel far around Calne without finding a home displaying a poster pledging allegiance to their favoured party. However, one expression of support has left residents outraged. 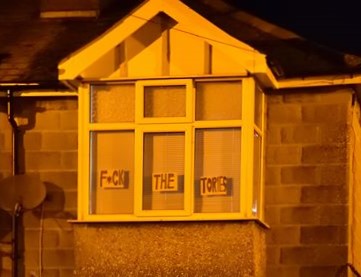 In one Calne home, the owner has proudly displayed a 'Vote Labour' sign in the downstairs window and then taken the extra step of displaying an expletive sign in the upstairs window.

Neighbours and passers-by have contacted Calne News to raise their concerns of the sign's impact on any children reading it.

One commented: "I dont care what your political views are, this is offensive! How do you explain that to small children?'.

Another neighbour said: "I think the election debate is getting overheated and people just need to calm down. I don't personally find it offensive but at the same time I wouldn't want my daughter to read it."

"As Sarah Church, South Swindon’s Labour candidate recently stated regarding graffiti, we need to 'raise the level of the debate'."

In similar cases elsewhere in the UK, local authorities have enforced anti-social behaviour legislation in the form of Community Protection Notices to remove the inflammatory signs.

It is not know at this stage whether such action will be taken.