With a general election scheduled for 12th December, campaign teams have started work in earnest and you won't have to drive far to see one of the many signs erected in fields locally.

However, in all the excitement, it would seem that some posts have been put up on Highways land, a move that Calne Labour have been quick to highlight as a 'no-no'.

Several signs for James Gray MP Conservative, have been placed along the A4 between Calne and Derry Hill, but signs are not allowed to be on Highways land, they are only allowed in private land with the landowners consent.

In a tweet sent out today Calne Labour party were quick to highlight the faux-pas. 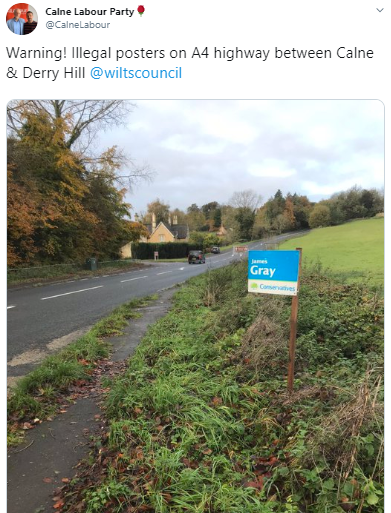 "You can put up the signs on private land but not on Highways land and last time the Conservatives complied and moved a large sign near Derry Hill over the fence.

"We were new to this in 2017 having only been set up in 2016 and removed ours when we were made aware of this rule.
"I think it was just a bit of over-enthusiam on all sides"